Preston Grasshoppers endured a mixed February as they lost crucial ground on the top positions in the league table after a couple of stern tests.

Confidence was high for the Hoppers after a great January that saw two draws and two wins, and they followed this up by cruising to their biggest victory of the season with a 39-16 win against Tynedale at Lightfoot Green. The result was also Hoppers’ third league victory in a row, putting them in good stead for the stronger tests that were to follow.

However, the seven-match unbeaten run, stretching back to the end of November, was brought to an end with a disappointing 15-8 defeat at Otley, meaning the Yorkshire side inflicted a league double over their Lancashire rivals and strengthened the points gap between themselves and Hoppers.

An even sterner test was still to follow against Leicester Lions and Hoppers narrowly lost out by 20 points to 17. It proved to be a crucial victory for the away side who kept themselves very much in the race for the second place play-off place behind current runaway leaders Macclesfield who travel to Lightfoot Green a week on Saturday. 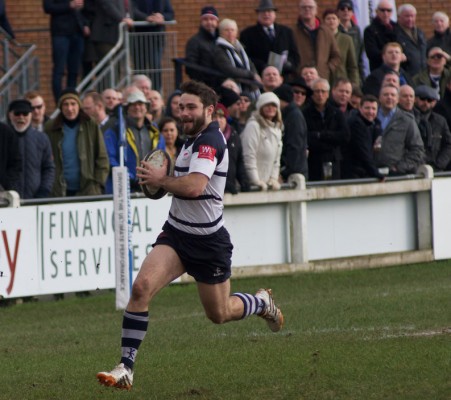 Before the clash with Macclesfield, Hoppers will be hoping to kick-off March by securing a league double over Luctonians, currently occupying the final relegation spot. While a win may not get them closer to Otley in 7th, it will pull the Hoppers even further away from the drop zone as they look to ensure National League Two North rugby for another season.

The postponed away fixture to South Leicester at the start of February has been rescheduled for March 26th.

Visit www.pgrfc.co.uk to keep up to the date with all the latest Hoppers news. Blue Wren are proud to be sponsoring front row forward Oga Mabaya during the 2015/16 season.

All photos accredited to Mike Craig.