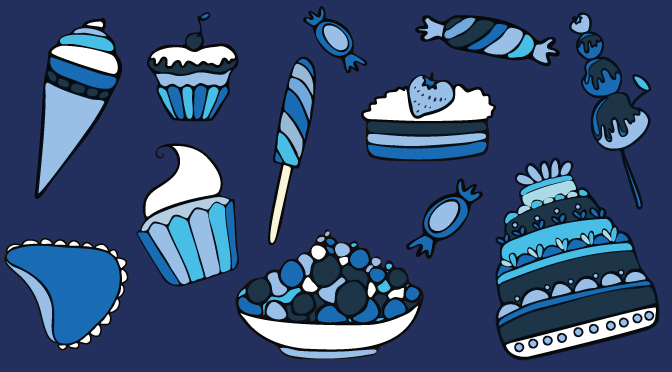 As a parliamentary debate draws ever closer to decide whether to introduce a sugar tax on fizzy drinks, we look back over the last three weeks at how this campaign began, flourished, and will potentially impact on NHS spending.

Jamie Oliver must be rubbing his hands in delight. A month ago, the TV chef, most famous for increasing radical awareness of the sheer volume of junk food served to youngsters in schools, was piecing together the final parts of his petition to help combat childhood obesity by proposing a tax on all sugary drinks.

This current total has smashed the 100,000 target required to be considered for a debate in parliament, and completely and utterly annihilated the 10,000 target necessary for a Government response. Within a two weeks, we will know the outcome of both, but for now must play the waiting game as Jamie seeks clarify on the next step which could prove pivotal in his sugar tax campaign.

So just how did this petition find itself in such a prominent position? Let’s retrace the steps.

Amidst petitions of migration and fracking, two of the moment’s hot topics, one petition popped up alongside these on https://petition.parliament.uk with a clear statement of introducing a 7p tax on sugary drinks in the UK.

A similar tax was passed in Mexico in late 2013 after it was revealed that 14% of the country’s population had diabetes, approximately 18 million people. An unhealthily high figure, but perhaps not all that surprising deep down for Mexican citizens who had collectively been aware of the nation’s obesity problem for many years.

Details surrounding the UK’s 7p sugar tax paralleled the Mexican campaign in the sense they were intended to shock as part of a call to action, but this could never be as hard-hitting to the UK public either who would view it as more of a confirmation of a problem rather than breaking news.

That’s not to say no one was shocked by the fact that tooth decay caused by sugar is the most common reason that five to nine year olds are admitted to hospital in the UK; few eyebrows may have been raised instinctively when the reality is right there in front of your face, but, presently in our culture, we are so exposed on an almost daily basis to inhumane acts across the globe, that the consequences a sugar-heavy diet is somewhat way down the shock scale.

All the petition could do, therefore, was raise awareness and justify itself.

It only needed a few short paragraphs to do so, and perhaps the most significant part of all: Jamie Oliver’s name at the end.

This simple yet effective sign-off instantly elevated the proposal and got people believing. Such is the authority of Jamie Oliver gained from his decade-long crusade promoting good food education to all corners of the UK, any campaign that receives his backing also receives a significant boost to its credibility.

While he isn’t without his sceptics, many view Jamie as an inspirational figure in helping to reverse unhealthy lifestyle trends in children, and this authority has certainly played a significant role this time around. The sugar tax petition is not, after all, just another Tom, Dick or Harry with an idealist dream; this is an individual who actually has the power to make a change.

Within 48 hours of the documentary airing on Channel 4, the petition had gathered the necessary 100,000 signatures to be considered for a debate in parliament. 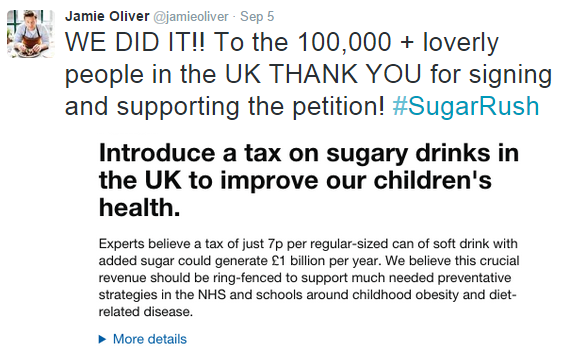 And still, it continues to rise.

The Sugar Rush hashtag (#SugarRush) was particularly effective on Twitter, uniting all those who came out in support of the new tax change, mirroring the thousands of Facebook news feeds that saw share after share of Jamie’s petition page.

By the time that LinkedIn and Google+ were factored into the equation, the page had way over 100,000 shares. And that’s even before online newspaper articles discussing the petition were caught up in the viral whirlwind.

But it proved to be Jamie’s stature once again that truly allowed for maximum exposure.

As of 16th September 2015, he has 4.79 million Twitter followers and his official Facebook page has just over four million likes. To put that into context, the TV chef is in way inside the top 500 most popular accounts on two of the largest social media platforms on the planet.

While it was still a challenge to make this proposal go viral, there can be no doubt that Jamie’s social authority simplified the process. Of course he couldn’t force people to add their signature to the petition as it jumped by the thousands with each passing hour, but he had absolutely no reason to do so; he made his message clear and left the power of social media to do the rest.

A host of celebrities including Alesha Dixon, Ronan Keating, Paloma Faith and Warwick Davis all joined in to tweet their support along the way.

So what does this all mean for the NHS and tackling childhood obesity?

While the planned introduction of 7p tax may not prove a costly enough incentive to prevent youngsters grabbing sugary drinks off shop shelves, or even their parents doing so during a weekly food shop, it will certainly go a long way to combat the NHS spending on treating conditions caused by excessive sugar intake.

The petition highlights Type 2 diabetes as one such illness that costs the NHS approximately £9b a year, in which case the 7p tax would go towards marginally reducing this deficit.

Sugar Rush certainly didn’t shy away from the horrors of diabetes, or indeed tooth decay; we all received front row seats as six-year-old Mario had rotten tooth after rotten tooth pulled on the operating table, and were later exposed to shots of legs missing feet, amputated as a result of diabetes.

Perhaps this was the approach Jamie Oliver was keen to take all along; saving the real shock factor for the TV screen rather than leaving it to the public’s imagination with a few words on his petition page.

Experts predict that, should Parliament pass this sugar levy, it could generate a revenue of up to £1b per year.

While this will not eradicate obesity overnight or cover all NHS spending on treating such sugar-related conditions, this revenue would support the necessary preventative strategies in the NHS, as well as in schools where childhood obesity and diet-related diseases remain major concerns, despite receiving greater attention in recent years.

The introduction of a sugar tax is seen as the first step in a streamlined strategy to help nip obesity and illnesses caused by excessive sugar in the bud, and it is partly in great debt to the power of social authority that its impact has already been felt on a mass scale.

You can view Jamie’s petition here https://petition.parliament.uk/petitions/106651 and keep updated with the Government response and Parliament debate.